A forum to discuss the Urantia Book.
Post Reply
1712 posts

A short presentation with valuable information!

Tip: Avocados spoil easily once ripe -
scoup out flesh and freeze in serving size portions,
then thaw immediately before consuming.

Chia seeds ("loaded with nutrients that can have important benefits for your body and brain.")

Dry fasting (intermittent fasting where both food and drinks* are skipped for a day or two) may be an extended method of simply not eating for the 8-12 hours usually required for the day's food to be completely digested. This oft-recommended bedtime fast helps the body return to its available insulin baseline (and why blood sugar testing is best after a bedtime fast).

* even this article cautions against not drinking fluids

Diabetes medication might be required if a fasting blood sugar is still too high (indicates insulin resistance and/or insufficient insulin).

A few 12-hour fasts with subsequent testing seem sufficient (IMO) to establish one's insulin baseline, becoming very encouraging when you learn that some insulin is still being created (else blood sugar would be higher after a long fast).

Tip: Once you know your baseline, carb control per meal gets easier (avoid carbs in excess of available insulin).

"Garlic foods prepared in the kitchen are usually made by the cooking of raw cloves or bulbs, such as by roasting or boiling or stir-frying, all methods of which completely inhibit alliinase. It is also common to simply dice (cut into small cubes) raw garlic and add it to various foods, a method which does not inhibit alliinase."

The last sentence of this quote is a big clue about garlic in centuries past: Garlic's health benefits were proven long before laboratory-created pills! And this article's mention that cooking inhibits alliinase hints that the body does not require a lot of garlic per meal for preventive health (else garlic would not have been proven effective in centuries past).

A few bites of bread with minced fresh garlic 'n butter (or extra virgin olive oil) might be sufficient.

Even serve a smalll condiment bowl of minced garlic 'n butter (or EVOO) for the main meal every day!

A near-paleo mixture, providing nutrition of fermented cabbage
with complementing nutrition (especially fiber) of fresh cabbage
and diluting the typical sodium in sauerkraut.

If desired, add a cup of water to increase moisture.

About the Sauerkraut Slaw ...

The concept was intended to begin process of making sauekraut,
using a can of sauerkraut as a "starter", but experiment was postponed
to test if a sauerkraut slaw would be appealing.

A convenience breakfast dish, best served corny side up.

Top with butter (or olive oil) and salt & pepper. Serve with cheese,
breakfast (or faux) meat and/or Mexican salsa.

Serve hot or cool, then refrigerate in covered container.
Use spatula to remove a serving, keeping eggs on bottom
(for presentation and to microwave later on low power).

Upscale the recipe (and convenience) ...
by increasing cornmeal to 2/3 cup rounded, then stir in
1 cup chopped asparagus and 2/3 cup sweet onions
(pre-cook in microwave to al dente texture).

I am interested in the Sauerkraut Slaw as it seems the best of both nutritional benefits. I would need to scale down the amount though as George is not a huge fan of cabbage. ( He had to eat it nearly every day to get by just after World war II as a young boy. So I guess I can't blame him. )

Sauerkraut Slaw is too dry and too much raw cabbage (cole slaw includes mayonnaise or dressing).
Microwaving the cabbage before mixing in the sauerkraut helped, but I drifted to Plan B:
Add a big scoup of the Slaw to soups and other dishes when I reheat them.

Plan D will be to Dump the cabbage in the outdoor mulch pile.

After Plan C (vinegar, celery seeds, garlic powder, olive oil),
I've decided that cole slaw is the best way to go with raw cabbage
... or go back to the original concept of using canned sauerkraut
to help ferment the shredded cabbage (at room temperature).

At the moment, with a belly full of raw cabbage,
I'm ready for a plate of hot sausage and stein of cold beer
(or just the stein). 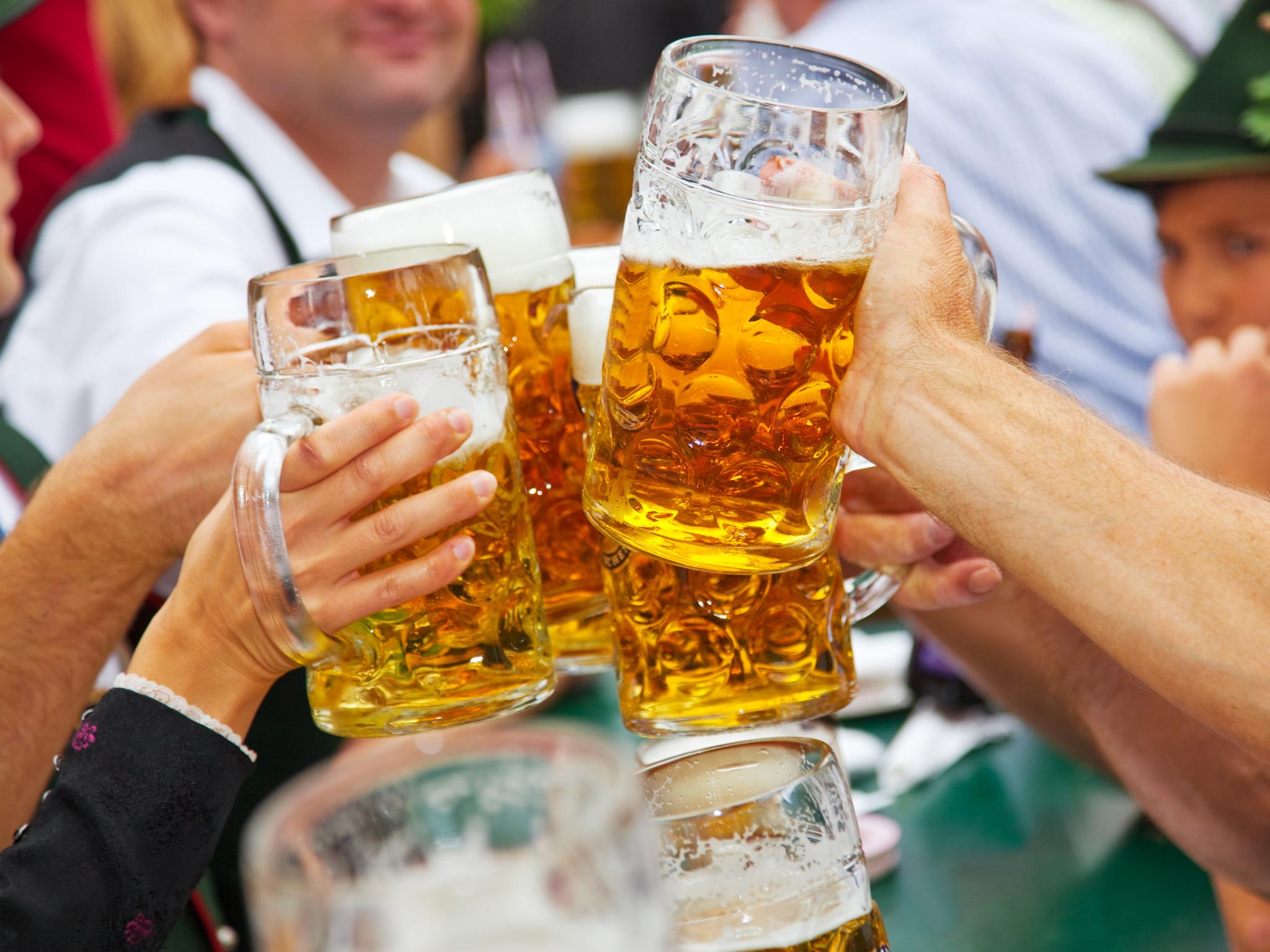 I must say that I have used plan D more times in my culinary career then I care to admit.

Okay I will have my slaw the old fashioned way... But, hey, have you ever mixed avocados into a slaw with olive oil, caraway seed and vinegar?
When I came here I found the recipe and used to make it for the two of us but now, after years of neglect...I haven't a clue where I found it. It was tasty but in small amounts as the avocado ...well, you know what avocado is like...

When I see beer, I imagine all the wonderful beer muffins I could make...

A recipe so simple that morning oat bran made with beer comes to mind.
(top with crumbled pretzels and cheddar cheese)

"What to drink?" Guess

no grain-based carbs should be consumed after the midday meal
(minimizes these carbs during the nighttime fast).

Thanks for the beer muffin recipe and advice to minimise high blood sugars.. I adore beer muffins with lots of butter.

Okay...I'm thinking maybe it would be best if I forgo making them for awhile until I have my Christmas indulgent habits under better control.

I will keep the grain based food to a a minimal after lunchtime. That should help both of us.

I discovered several years ago while testing a Keto-type diet that elimination of grain-based foods
made blood sugar control much easier. However, grains (especially whole grains) are still important
and provide good nutrients including fiber. So, the reasonable compromise was to minimize
processed grains (especially flours) and consume conservative portions of whole grains.

Now ("conjecture"), keeping grain-based consumption long before bedtime, those carbs
should be digested while we're physically active with our daytime "busyness".

) began after bedtime cooking
of a pot of whole grain barley; I intended to refrigerate it for use during the week.
Since I was hungry for a snack and realized that this was a good time to test barley's effect
on blood sugar, I consumed a cup of the cooked barley by itself - not even S & P

Eight hours later my blood sugar was much higher than expected! Obviously ...
it was time to focus on the effects of grains.

Many months later, I had to consider how I was going to replace the fiber
that I was getting from grains. Recently, I've learned that flaxmeal helps ...
... like 1/3 cup golden flaxmeal added to cornbread batter.

Loads of good ideas in that last post. Thank you!
Is flaxmeal the same has Psyllium husks? hmmm ....wait ...is it a kind of crushed linseed? LOL Obviously I have a lot to learn in this area.
( I could use some of your warm barley tonight. Yum you are making my mouth water. but will keep in mind its blood sugar raising properties and use it in a more conscientious way. )

This inspiration was then followed by Corn Paddy ...
include golden flaxmeal (golden linseed) in cornbread batter
and bake like muffin tops (consume as bread with a meal).

Why not? Eggs 'n Corn Paddies (literally ...
bake tops with egg in the center; create a loose foil dome
for initial baking, then remove for final minutes).

(mostly for baking and serving convenience)

In a medium bowl, whisk eggs,
then whisk in remaining ingredients,
except olive oil and corn.

Pour into dry mixture, stir to combine,
vigorously stir in olive oil, then fold in corn.

Slice with a pizza cutter or knife,
then use spatula to loosen slices.

Individual muffin tops are equally enticing.
(and easier to remove from the baking sheet)

These fresh foods are probably more beneficial than most supplements
advertised as containing similar nutrients (including multivitamins).

I began reading the healthiest vegetables and food URLs. They are wonderful! Thank you for posting them here so that the readers can have this information at our fingertips. I am all fired up now.

Your Yellow Corn Paddy recipe too sounds like a keeper for this southern gal who grew up enjoying the taste of corn bread and corn.

Have a great week end.

When cabbage is cooked, stir briefly then mix
with diced beets and prepared beet juice.

Return to “The Urantia Book”